I’ve noticed that today’s cozy mystery book covers often feature a cat as part of the art. Many times, the cat pictured is there for decoration and does not play a role in the story. In other books, the cat may be the feline companion of the principal character, and in some stories the cat is an integral part of helping the detective solve the crime.

The frequency of cats on the covers got me thinking about the history of our fury companions, and also some of my favorite movies and books that have a cat in the story.

History of the Cat

When cat fossils were first discovered, it was difficult to determine specific species or origins. The only distinguishing characteristic was a slight difference in size. But with the development of DNA research in 2006, scientists had additional information to help establish origins.

From this research, scientists believed a cat that lived in Asia traveled to North America by the Bering land bridge and then returned to Asia. Each time the cat migrated, a new species developed and one of these new species became the common house cat. Many experts believe Felis libyca, an African wildcat, is the original ancestor of our domestic cats.

Originally, researchers thought the cat’s domestication was about 4000 years old and part of the ancient Egyptian culture. More recent research shows cats lived near Chinese farmers some 5300 years ago. These farming villages attracted the cats because of rodents and other small animals living in the area. This was a mutually beneficial relationship as the farmers didn’t have to deal with pest control and the cats had a ready source of food.

In the Middle Ages, the fate of the cat changed from being a respected hunter to one of persecution. During this time, many people believed that witches and black cats formed alliances. This alliance allowed the witches to transform themselves into a cat so they could cast spells without their victims being aware.

Settlers brought these same beliefs to America. When an unexplained event or death occurred, people believed the devil, using witchcraft, was responsible. The result was the era of the Salem Witch trials.

After such a negative beginning in America, it took many decades for the cat to elevate its status beyond superstitions. Today, cats enjoy the number two spot as the most popular pet in America behind the dog. Even though cats are in second place in pet popularity, they can take comfort in knowing their cerebral cortex, the part of the brain responsible for cognitive information processing—is more complex than in dogs. Cats have some 300 million neurons, as compared to 160 million in dogs.

There are many superstitions associated with black cats. As mentioned above, written documentation supports the superstition between black cats, witches and witchcraft.  Not only black cats, all cats are nocturnal and people believed they roamed freely during the dark hours doing mischief.

Throughout early 13th century Europe until the 17th century Salem Witch Trials in Massachusetts, they killed black cats along with those charged as witches. Black cats continue as icons of anything related to witchcraft, especially during the Halloween season.

Do black cats signal death? In medieval times, they believed that any animal with black fur or feathers, including ravens and crows, signaled death. Several countries believed if they found a black cat on a sick person’s bed, death was imminent. And if they spotted a black cat during a funeral procession, another family member would pass away within a short period. 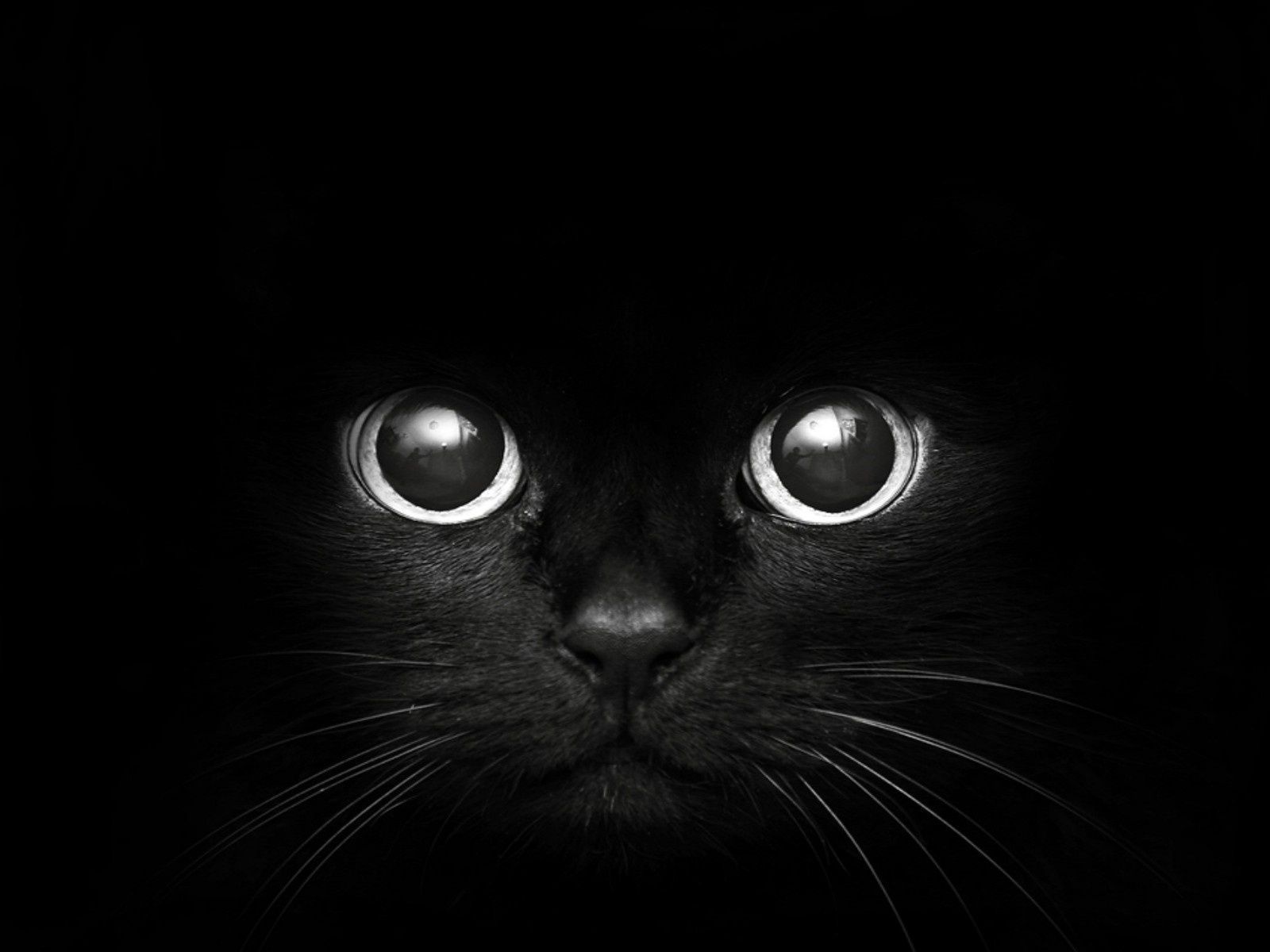 Medieval times were not the only era with cat superstitions. Even today many people still believe it’s bad luck if a black cat crosses your path or you spot one walking away from you. But it’s good luck if a white cat walks towards you or crosses in front of you.

In Japan, black cats and all cats are symbols of good fortune and prosperity. The Japanese Maneki Neko cat statue, which can be black or white, sits inside almost all businesses. It raises one paw to wave in good fortune. Also, many young, single women in Japan own black cats, because they believe it will bring them many suitors.

Do Cats have 9 lives?

One of the best-known superstitions is that cats possess nine lives. We may base this myth on the cat’s ability to leap and make safe landings that would normally injure other animals. The association with witches who could turn themselves into other creatures and bring them back from the dead may also have added to this belief.

Cats on the big screen

There are many examples of cats in the movies starting with the early monster flicks like The Black Cat starring Boris Karloff and Bela Lugosi. And who can forget Ernst Stavro Blofeld’s white Persian cat in the James Bond movies, or Cat Woman as the thorn in Batman’s side, or the interesting scenes created by Crookshanks, Hermione Granger’s pet cat, in the Harry Potter movies.

There are many choices, but I’m going to focus on two of my favorite movies where cats play a significant role and reinforce the supernatural element of the feline.

Hocus Pocus is a movie which exemplifies the witch trials and the use of a cat for casting spells. Young Thackery Binx sees his young sister, Emily, captured by witches. The witches are trying to regain their youth, but in the process, they kill Emily. They also cast a spell on Thackery, condemning him to an immortal life as a black cat named Binx. The movie follows the return of the Sanderson sisters—Bette Midler, Sarah Jessica Parker, and Kathy Najimy, who play the witches executed in the 17th century.

The plot focuses on a group of local teens, trying to eliminate the witches, break the curse on Binx and reunite him with his sister during a series of Halloween events.

In the movie Bell, Book, and Candle, Gillian, played by Kim Novak is a witch who uses her cat, Pyewhacket, to cast spells. This includes casting a spell on Shepherd, Jimmy Stewart, so he will fall in love with her. We get an inside look at the world of witches and warlocks as Shepherd attempts to reverse Gillian’s spell. We learn that when Gillian falls in love; she loses her powers as a witch, and her formerly faithful cat leaves as he can no longer help her with spells.

There are many books available with a feline assistant, so it was difficult to select just four. However, these four examples, all series, feature cats in different ways.

It’s hard to discuss any series with a cat without first mentioning Lilian Jackson Braun. I might add this was my first blog for this website highlighting this remarkable author.

In later books, this unlikely trio leaves the city and shares a converted old apple barn in the town of Pickax in Moose County, which readers learn is located 400 miles north of everywhere. And like the residents of Pickax, I looked forward to Qwilleran’s Qwill Pen column in the Moose Something newspaper.

While Qwilleran was the chief character in the stories, most readers knew the actual hero of the series was Koko. Koko had a “sixth sense” which enabled him to assist Qwill in solving mysteries. This special cat knew in advance when something dire was about to happen. Koko not only predicted the future, but aided Qwilleran, usually by knocking a book off a shelf, to the clues that would help him solve the crime.

This is one of the most famous long-running cozy mystery series begun in 1966 with The Cat Who Read Backwards and continued for twenty-nine mystery novels and three related collections. Ms. Braun was still writing at the time of her death at 97. This should also be an inspiration to all writers: it’s never too late to write a story.

Miranda James Offers A Cat in the Stacks Mystery Series

This was a new read for me, but I thoroughly enjoyed this series featuring librarian Charlie Harris and his Maine Coon cat, Diesel. Unlike the cat series with Qwill and Koko, Charlie and Diesel aren’t a crime-solving team. Diesel has no special powers, but he seems to understand what his owner says and offers comfort to others. He’s Charlie’s best friend, which makes these books a fun read.

Charlie Harris is a librarian who gets involved with solving murders in the small town of Athena, Mississippi. He lives in his deceased Aunt Dottie’s house and rents out rooms to college students. Charlie, is a retired widower who spends his time working at the Athena College library in the books and archives department, and volunteering at the local public library.

The first mystery, Murder Past Due, involves one of Charlie’s borders, a first-year student Justin Wardslaw, who unwittingly becomes mixed up with the murder of a local author. While James writes several mystery series, he currently has twelve additional books in the Cat in the Stack group.

The stories feature postmistress Mary Minor “Harry” Haristeen, and her pets solving a series of murders occurring in the town of Crozet, Virginia. As postmistress, Harry knows everyone in the town and she’s not afraid to ask questions as she tries to solve the crime. However, the reader soon learns that her pets are usually one step ahead of her and try to lead her in the right direction for the solution.

We get to read the story from both the human and the animal’s perspective as each follows a path to uncover the clues and the suspects. The first book in the series created in 1990 is Wish You Were Here, followed by 28 additional Mrs. Murphy books. One additional fact, we are told that another cat named Sneaky Pie Brown is the actual author of the books.

I started this series with the audiobook version. I found these books a great way to end the day with a bedtime story listening to narrator Pearl Hewitt’s lovely English accent.

The series features Gemma Rose, owner of a tearoom and her somewhat naughty tabby cat, Muesli. Gemma earned her degree at Oxford and the reader learns about the various colleges and the traditions the institution follows, along with visits to the surrounding Cotswolds villages.

Although Gemma runs the Little Stables Tearoom featuring traditional English treats, what’s not so traditional are the dead bodies that keep turning up. Helping her solve all the murders is boyfriend Devlin O’Connor—CID detective, four elderly patrons known as the Old Biddies, her best friend Cassie and of course Muesli.

Gemma calls Muesli naughty because of his nature for constantly getting into things and straying away from Gemma to do his own snooping. However, most of his antics lead to a clue that helps advance the solution. Muesli is also very protective of Gemma and on more than one occasion has leaped to her rescue.

With these examples, we have four different roles for our feline helpers. Koko provides a sixth sense to help Qwill solve the crimes in Lilian Jackson Braun, the Cat Who… series. In the Cat in the Stack series, Diesel is a pleasant companion to Charlie and a comfort to those caught in the current crime. With our third example, the reader relies on Mrs. Murphy and Tee Tucker to help guide Harry and the reader towards the correct solution. And our final feline assistant, Muesli, helps find clues while protecting his owner.

If you are a fan of cats or you just want to read a good mystery, check out these four authors along with the many other mystery books with a cat in the story.