Baffling incidents, ghostly sightings, and murder confront Carrie and Charles Faraday in the latest entry in my cozy mystery series. I’d like to tell you a bit about the plot. But don’t worry, I’ve been very careful not to give away the ending.

Carrie and Charles Faraday are looking forward to a much-needed vacation in this fourth book in the Faraday Murder Series.

The couple married late in life, but since their marriage, they’ve solved three murders. They met while searching for the murderer of Charles’s brother Jamie in Take a Dive for Murder. Then Carrie faced charges for the murder of the playboy son of a prominent family in Take Stock in Murder, and last summer the couple solved a murder that involved her father’s computer company in Take a Byte Out of Murder. Now they’re ready for some relaxation and are trying to decide where to go on vacation.

While selecting reading material to take on their holiday, they get an unusual invitation from the owners of the Tri-County bookstore, sisters Maddy Luther and Marge Millford. The sisters’ family owns a century old country inn, Millford Manor, with a rich history in the northern part of the state.

Perhaps because of all the history, Manor guests have always reported seeing fleeting apparitions. These include a Civil War soldier in uniform and a woman in fifties style dress dancing through the hallways. There are also unexplained sounds of music and mysterious voices.

The sisters report these previously friendly spirits are now causing problems. Guests are being told to “get out,” property is being destroyed, and reservations and event bookings are falling. The incidents are having a financial impact on the Manor’s bottom line. The sisters implore the couple to spend their vacation at Millford Manor to see if they can discover who or what is behind all these negative events.

Carrie and Charles consider Maddy and Marge good friends and feel like they want to help. The sisters, unlike other members of the Nottingham community, were supportive when the police charged Carrie with murder.

The couple decides this is a perfect situation for them. They can enjoy a holiday at Millford Manor and have the challenge of an intriguing puzzle to solve. They will be undercover with Carrie posing as a writer hired by the family to create a new marketing brochure. This will give her access to all the behind the scene locations.

Based on the original advertising brochure the sisters showed them, the couple assumed the inn was an oversized bed-and-breakfast. They are both shocked and pleasantly surprised to find that Millford Manor is a large resort with several restaurants and multiple amenities. They’re hoping they can find a quick solution to the unwanted activity and then enjoy their holiday.

The couple starts their investigation by meeting the cousins of Maddy and Marge, who handle the day-to-day management: Beatrice, Albert and Elizabeth (Lizzie) and also Albert’s son, Ryan. They learn from them the incidents continue to escalate. This unwanted activity is happening while the Manor is in the middle of a massive construction project to add a conference center and other buildings to the property.

Carrie and Charles have barely started their investigation when there’s a murder. The killing of Ken Harvey, the hotel’s event manager, changes everything. Was Ken part of the problem, or was he murdered because he uncovered the reason for the plot against the family?

While trying to solve the murder, Carrie is also experiencing some of the ghostly activity guests have reported. She believes she has encountered Roxie, the murdered girlfriend of the former Manor manager and family member, Bernie Millford. Carrie can’t explain what she’s seeing, and Charles is sure there must be a reasonable explanation. Surely ghosts aren’t causing Millford Manor’s problems, but how do they explain Carrie’s experiences.

The pressure is on the Faradays to solve the crime and save the hotel before someone else dies. Carrie and Charles must use all their sleuthing skills to uncover clues and suspects, both human and ghostly. Not until a final deadly confrontation are the culprits revealed and the problems for Millford Manor solved.

Take the Spirit of Murder

Amazon: (Use this link for Amazon) https://tinyurl.com/y5r4m3v8

Check out all the books in the Faraday Murder Series 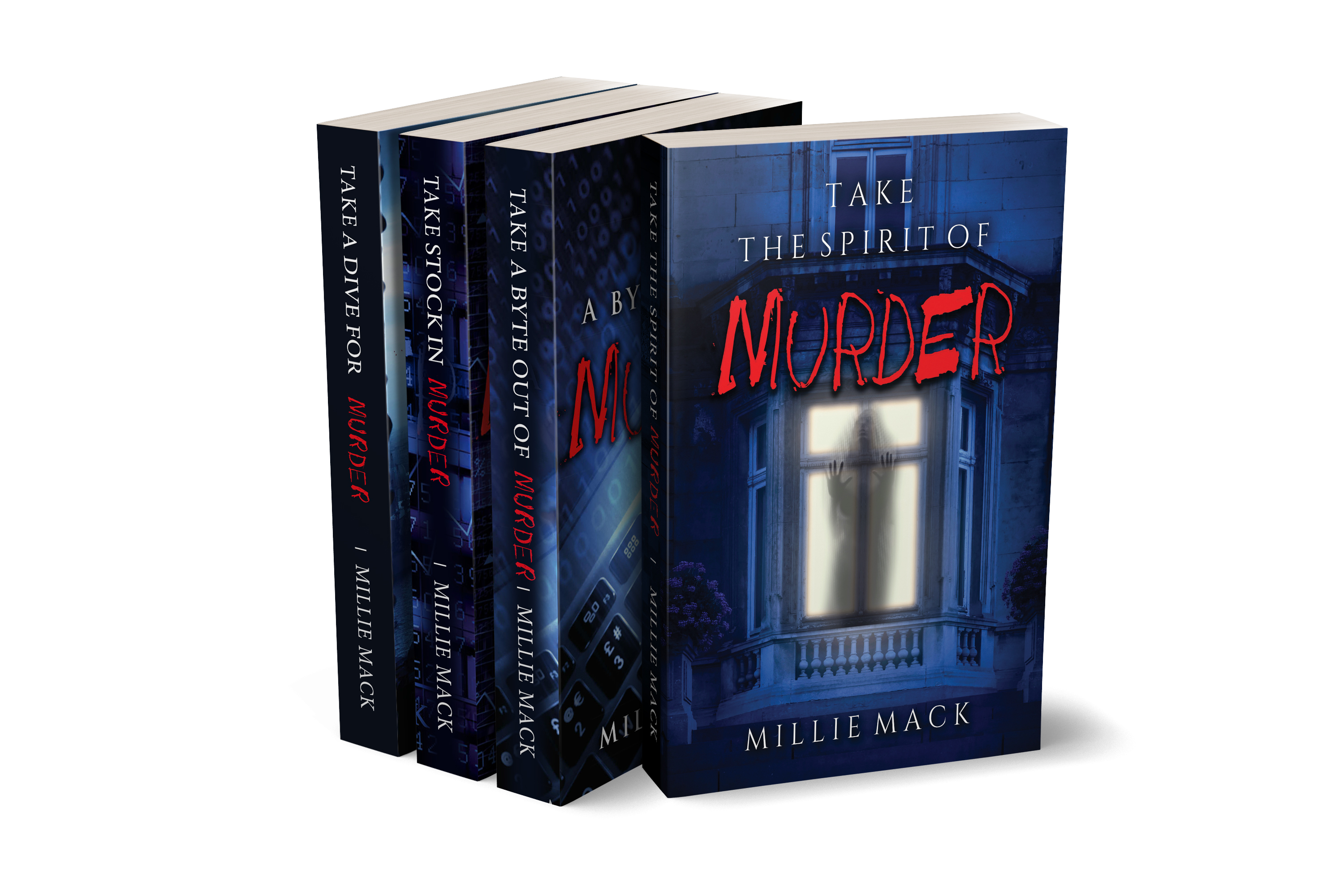 Take a Dive for Murder

Take a Byte Out of Murder