Film Noir is French for Black Film. Classic Film Noir generally refers to a period of Hollywood film making between 1940 through the 1950’s. It’s believed its cinematic style was influenced by German Expressionism which featured bold artistic styling including unusual camera angles and experiments with lighting. Prior to the Film Noir classification this type of movie was referred to as melodrama. And there are also many movies after the classic period of Film Noir that continue to follow the style and techniques developed.  Let’s take a closer look at Film Noir.

Some critics believe Film Noir is its own genre. Other critics strongly disagree stating that Film Noir encompasses several genres. Film topics might include crime solving, police procedures, gangsters, social or political commentary, westerns or even a Gothic romance. While it appears these films can’t be categorized into a single genre they do share some common characteristics.

Most films classified as Film Noir were produced with limited set designs. The films were shot in black and white with gloomy grays on dark streets. 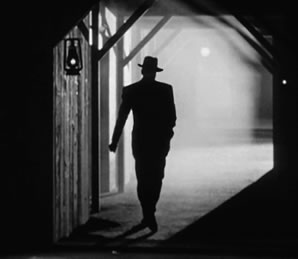 They featured an event that often brought strangers together to find the solution. Film Noir’s bleak, dark outcomes are often pessimistic compared to the typical Hollywood happy ending films.

The leading men of these films were all different. The hero might be a hardboiled detective, but the hero could just as easily be an ordinary citizen unwittingly trapped in circumstances beyond his control. We might find a star crossed lover, a boxer, a cowboy, a policeman, a drifter or even a writer (William Holden in Sunset Boulevard) as the leading man pulled into the darkness of the drama.

Unlike our leading men, the female stars all shared a common characteristic.  The female lead might be the innocent housewife from suburbia or the gangster’s girlfriend living on the edge of the criminal world. Their background didn’t matter because the women all had a certain sexual overtone in common. It might be the way she sat on the edge of a desk, the arch of her eyebrow, the outfits she wore, the emotion she displayed, or the way she lit her cigarette─ regardless the sexual attraction was there. This attraction might be the main story or a subplot but her presence complicated the hero’s life. Two of the female actresses who displayed these characteristics and were considered icons of Film Noir are Jane Greer (Out of the Past, The Big Steal) and Lizabeth Scott (Dead Reckoning, Pitfall). Between them they made films opposite most of the leading men of Film Noir.

Most of Hollywood’s classic Film Noir falls into the “B” movie category. This means they were shot with very low budgets. Several major studios set up separate “low budget” divisions or they might contract a lesser known studio to create a B-movie to run at the bottom of a double feature.

Generally B-movies were shot with a budget of around $100,000 compared to a Hollywood A-movie having a budget around $600,000. However, the budget did not limit the acting talent. Some well known movie stars made appearances in Film Noir. Alan Ladd and Veronica Lake were first teamed in This Gun for Hire and two of the most prolific Film Noir stars were Barbara Stanwyck and Burt Lancaster.

The Film Noir era also gets credit for using stories from some of our best mystery writers. In a previous blog we discussed Pulp Fiction and the writers who created stories for magazines like the Black Mask. Many Pulp Fiction stories and mystery novels were the foundation for Film Noir movie scripts.

In the October, 1934 issue of Black Mask Magazine, Chandler introduced his type of hard-boiled detective that later developed into Phillip Marlowe. Then in 1939 Chandler’s The Big Sleep was published and this was the first of his books made into a Film Noir. His book Farewell My Lovely provided material for the film Murder My Sweet. Then his Lady in the Lake was also turned into a film. But Chandler was also known as a screen writer and provided scripts for Double Indemnity, Strangers on the Train and the Oscar nominated The Blue Dahlia.

In 1928 Hammett published The Red Harvest which many critics considered his best work. While this book was the basis for the characteristics of the hardboiled detective The Red Harvest was never made into a Hollywood film. However, Hammett’s other books The Maltese Falcon and The Glass Key made it to the Big Screen. Even his novel The Dain Curse was a television series in 1978. And of course his most famous book The Thin Man provided the opener for a series of movies featuring Nick (William Powell) and Nora (Myrna Loy) Charles.

In 1931 one of Hammett’s short stories was behind the gangster melodrama City Streets. Although this film was before the official start of the period, some film historians insist this is the first Film Noir.

James Cain’s novels provided the stories for such Film Noir classics as Double Indemnity, Mildred Pierce, The Postman Always Rings Twice, and Slightly Scarlet based on his story Love’s Lovely Counterfeit. Aside from his stories Cain is credited for creating the template that Film Noir scripts followed. His lurid, action packed tales take place in low rent districts with cigarette smoking anti-heroes pulled into the action by a femme fatale.  While his characters are basically losers we still feel for them. He helps us to see that the situation they’re in was through no fault of their own.

Two of the lesser known ─although two of the most prolific writers of film noir─ are Cornell Woolrich and W.R. Burnett.

Cornell Woolrich wrote two dozen novels and over two hundred stories. He has been called the fourth greatest hard boiled fiction writer after Hammett, Chandler and Erle Stanley Gardner. He has also been called the “Father of Film Noir” for works including Street of Chance, The Mark of the Whistler, Phantom Lady, Deadline at Dawn, Black Angel, Fear in the Night, and Night Has a Thousand Eyes to name a few. His most famous work was Hitchcock’s Rear Window, but few people would know his name as the author.

Woolrich lived almost like a character from one of his stories. After a short period in Hollywood, he returned to New York where he lived as a recluse. He spent twenty-five years living with his mother (a love-hate relationship) in a seedy Harlem hotel.

W.R. (William Riley) Burnett wrote thirty-nine novels and was involved with another forty motion pictures. Burnett’s stint as a night clerk in a sleazy motel exposed him to many of the character types found in his stories like hoodlums, prize fighters, indigents, and gangsters. He tended to portray characters pulled into a life of crime who then found it impossible to find their way out. However, the characters are not pure evil. Their humanity and sense of morality to do the right thing leads to their undoing.

Burnett’s novel Little Caesar provided the story for Edward G. Robinson’s portrayal of the gangster, Rico. This classic film is considered the first of the gangster movies. His writing credits also include High Sierra, This Gun for Hire, Nobody Lives Forever, The Asphalt Jungle, and I Died a Thousand Times.

And of course we can’t forget Orson Welles and his contribution to Film Noir movies starting with his classic entry of Citizen Kane. The Third Man is considered an iconic Film Noir, although Welles didn’t receive a writing credit. He did write the screenplays for Lady from Shanghai and Mr. Arkadin. Most critics agree that Welles 1958 film Touch of Evil is the last entry for the classic Film Noir period.

Film Noir is known for introducing some cinematic techniques that separate this category from others films. These techniques add to the intrigue of the story line. For instance in Lady in the Lake the entire film is shot from the point of view of Marlowe (Robert Montgomery) and the audience only sees his face when he looks in a mirror. For the movies D.O.A. and Sunset Boulevard the story is told by dead men through a series of flashbacks. Flashbacks help the viewer to understand how the story reached its current point in time.

Another technique is voiceover narration. Here a film character or an unknown narrator explains the scene which appears in the background. This method moves the story along without every scene being shown in detail to the audience.

Film Noir portrays a sense of good and evil and right versus wrong. Justice usually wins, although it may not be dealt through the normal channels like a court of law. A character may be both judge and jury when dealing out punishment. Also justice may not come easily for our hero. In the Maltese Falcon, Sam Spade is in love with Brigid, but by the end of the film he turns her in for the murder of his partner. Dealing justice, maintaining a sense of morality and choosing right over wrong is what separates our Film Noir hero from the other dark characters in the story. It allows the viewer to deal with the pessimism of the film knowing the hero stands for something good.

Purists will insist that the Film Noir period ended with the 1950s. Yet there is no denying that the film techniques developed, the character types created and the dark story lines continued well beyond this period. It’s hard to see many differences in Cape Fear, Manchurian Candidate and Shock Corridor all from 1962 when compared to classic Film Noir. But it doesn’t stop with films in the 60’s. Is there any doubt that Chinatown from the 70’s with Jack Nicholson portraying Jack Gittes is much different from the hardboiled detectives of the past? Or is the tale told in Taxi Driver by Robert De Niro any different from the stories related by other troubled anti-heroes.

And the movies still adapt stories from writers like Ray MacDonald for The Drowning Pool and Chandler’s Farwell My Lovely or the Oscar winning L.A. Confidential from James Ellroy’s novel.

Femme fatale’s have not changed much either. Sharon Stone from Basic Instincts certainly matches her counterparts from the 40’s.

We still have black and white adaptations like Scorese’s Raging Bull film in the 80’s and the Coen brothers The Man Who Wasn’t There in 2010. And even with the addition of color there are other techniques that capture the feeling of Film Noir. For instant the constant rain and the smoky blue scenes from Blade Runner where Harrison Ford plays futuristic detective creates the same feeling as the gloomy gray scenes from earlier films. And these are only a few examples of later  films that use the techniques from the Film Noir period.

Film Noir was a unique period providing great film classics, but let’s not forget it is alive and well today. Whether enjoying a movie from the classic period or a movie from a more recent time Film Noir continues to entertain a new generation of audiences and mystery fans.

This entry was posted in Blogs, Mystery Films. Bookmark the permalink.