I’ve blogged many times about Agatha Christie and her characters, but there was another well-known mystery writer from the same time period −Dorothy Leigh Sayers. Christie and Sayers are in a select group of writers from the early Golden Age of Mystery whose books have remained popular. They knew each other and were both members of The Detection Club. 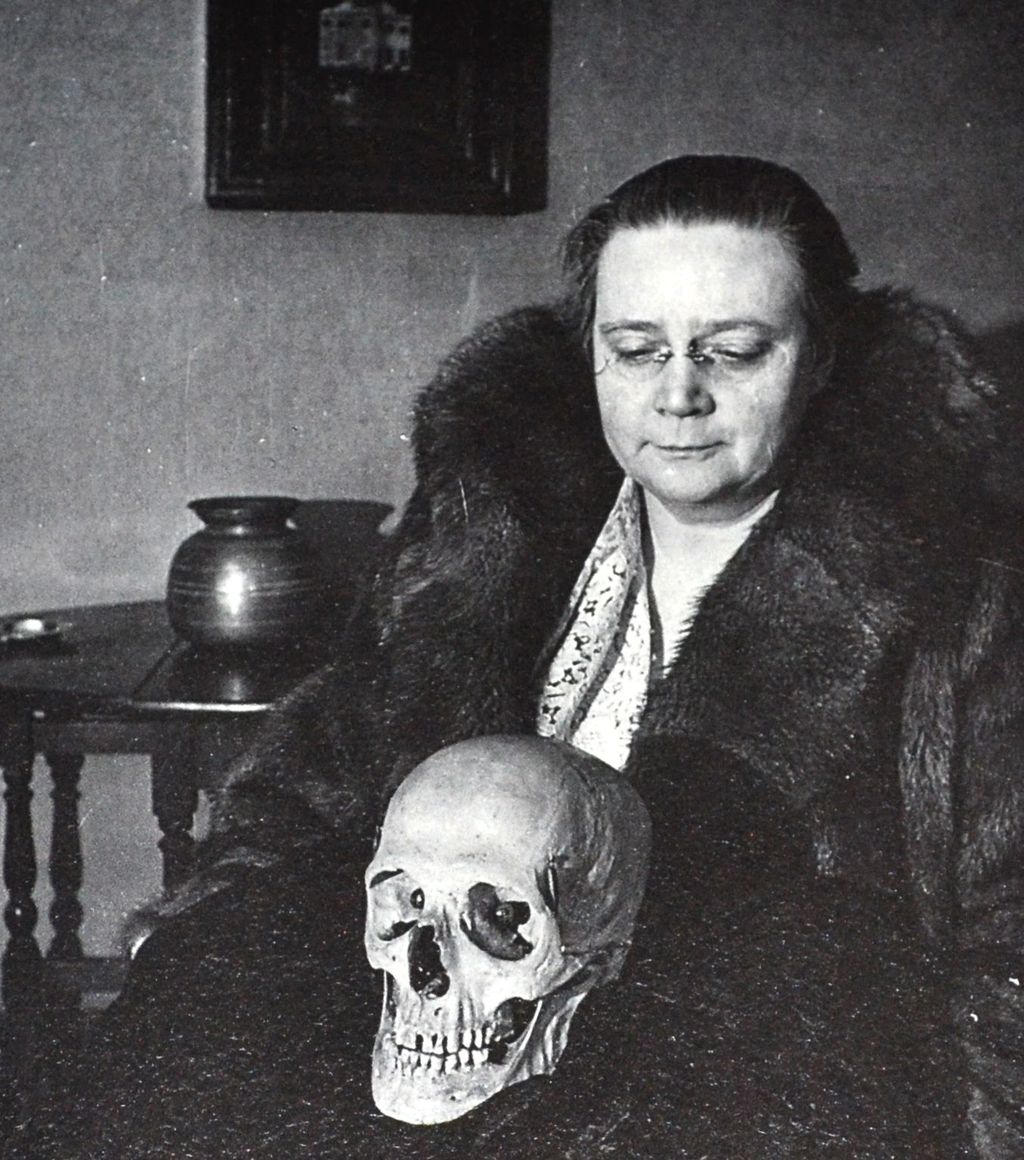 Sayers was a poet, an essayist, a playwright, a translator and a fiction writer. She is perhaps best known for her mystery novels and short stories that featured her detective, Lord Peter Wimsey. She was also an admirer of Wilkie Collins who she felt took the mystery genre to a new level and also had a profound influence on her writing style. Over the years she worked on a biography of Collins which was still unfinished at the time of her death.

Sayers was an only child born to Helen Mary Leigh and the Rev. Henry Sayers. Her father was a chaplain of Christ Church Cathedral, Oxford and the headmaster of the Choir School. He began to teach her Latin at an early age followed by a formal education at a boarding school in Salisbury. Then Sayers won a scholarship to Somerville College, Oxford where she studied languages and medieval literature. When she finished in 1915 with honors, women were not awarded degrees. Later when this rule changed, she was one of the first women to receive her degree in 1920.

She held several positions after college but settled in as a copywriter with SH Benson advertising. She worked on many different accounts including Guinness Stout and is credited with the phrase “It pays to Advertise.” She felt the ‘Literacy Department’ where the advertising copy was produced was similar to the congenial sharing and discussions she experienced during her college days.

Sayers was very tall and her long neck earned her the nickname ‘Swanny.’  What she lacked in beauty she made up in her sharp intellect and her body of literary work.

Sayers during her lifetime was not very lucky with love. One unfortunate affair produced a child −John Anthony− who was cared for by Sayers’ aunt and cousin. Very few people knew this secret and it wasn’t revealed to the public until after her death.

She did marry Captain Oswald Atherton Fleming (Mac), a Scottish journalist who was twelve years her senior. In the early years of their marriage there were shared adventures as Sayers joined Mac on his journalistic assignments. However, the later years proved more difficult. Fleming had been injured in the war and ill health, drinking and Sayers success began to take a toll on the marriage. Fleming was eventually unable to work and money was tight as Sayers provided for her husband, her mother and her son.

For Sayers, Anthony Berkeley’s invitation to join The Detection Club was an opportunity to escape some of the problems of everyday life. Sayers was one of the founding members of the club and later served as president. She helped to create and take part in the elaborate ritual new members were required to endure. The ceremony included candlelight, robes and a skull named ‘Eric.’

The club developed a series of rules that mystery stories should follow and Sayers also believed that mysteries could be more than light entertainment. Sayers contributed to The Detection Club publications and books including, The Floating Admiral (1931), Ask a Policeman (1933) and Double Death (1939)

The meetings were a social event where fellow mystery writers shared dinner and writing projects. They discussed real life crimes and often used these crimes as a basis for their plots. They also borrowed each other’s personality traits and adapted variations on member’s names when creating the fictional characters in their mysteries.

Sayers developed a unique and memorable character with her Lord Peter Wimsey. Sayers once commented that Lord Peter was a combination of Fred Astaire and Bertie Wooster.

Although a fictional character, Sayers created a complete profile for Wimsey. He is from a wealthy old family that can be traced back to the crusades. He is described as being of average height with strawberry blond hair, a beaked nose and a foolish looking face. He is an expert on food and wine and has an extensive library. He excels at playing the piano and is considered a bon vivant.

He was the second of three children of his father the 15th Duke of Denver. His mother Honoria Lucasta Delagardie appears throughout the novels as the Dowager Duchess of Denver. His brother Gerald is married to a snobbish wife who dislikes Peter. Peter’s sister, Mary married beneath her station to a police sergeant, Charles Parker. However, Parker gradually moved up to the rank of Commander and is often involved with Peter’s cases.

Wimsey served as a major in World War I where he was severely wounded and suffered from shell shock. During his war service he met Sergeant Bunter. They became friends and Wimsey promised that if they both survived the war he would give Bunter a job. Bunter becomes Wimsey’s valet and helps him through several relapses brought on by war memories. Bunter’s photography hobby is also helpful to Wimsey in solving cases.

Another major character in the Wimsey stories is Harriet Vane. Vane writes detective novels and is said to be the alter ego of Sayers.

Wimsey first appeared in the short story The Vindictive Story of the Footsteps that Ran. The story offered an interesting discussion between Wimsey and Bunter who we meet for the first time. In addition to the Wimsey tales Sayers also wrote a series of short stories with Montague Egg, a wine salesman who solves crimes. 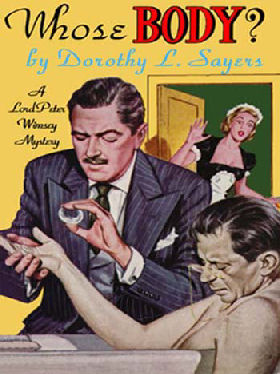 The first Wimsey novel was Whose Body. A dead body is found in a bath tub wearing only his pince-nez. Understanding why he was wearing the pince-nez leads Wimsey to the murder solution.  The following year Sayers published Clouds of Witness. In this novel we get a closer look at Wimsey’s family as he defends his brother.  Gerald is accused of murdering his sister, Mary’s fiancé. Mary is also involved as she saw Gerald leaning over the body.

Then there are a series of books featuring Harriet Vane. Wimsey first aids Harriet’s defense team in Strong Poison when she is charged with the murder of her former novelist boyfriend. After her successful defense, Harriet goes on a vacation to work on her new detective novel. During her walking tour she discovers a dead body on the beach. Wimsey reads about the event and rushes to help her solve the murder in Have His Carcase.  Wimsey eventually marries Vane in Busman’s Honeymoon. Following their wedding they travel to a house near Harriet’s childhood home where they discover the former owner’s body in the cellar.

All authors rely on elements from their personal lives for their books and Sayers was no exception. Her experiences at college are the foundation for the novel Gaudy Night. Harriet is asked to help her former school with a series of disturbing events including poison pen letters, vandalism and a hint of murder. Murder Must Advertise draws on Sayers’ experiences while working at Benson. Wimsey replaces a copywriter who has died from falling down a flight of stairs. The Nine Tailors is based on the names of the bells at a church where Wimsey and Bunter are stranded one New Year’s Eve. Sayers provided a very accurate description of the church rectory and it is also said that several of the names for her characters came from the tombstones in the graveyard at her father’s church.

Sayers’ Wimsey stories always included a complicated murder plot. Her plots concentrated on the villain’s method of murder and then the villain’s attempt to cover up the murder. There are many avenues of inquiry presented that need to be unraveled to get to the core of the crime. These subplots provided an assortment of red herrings to divert the reader. And in all the Wimsey stories there’s always an element of humor.

Sayers’ Lord Peter Wimsey mysteries give readers a glimpse into the society and values of the time. The stories follow the rules for Golden Age Mysteries and provide the reader with all the elements of a good story.