Georges Simenon was a Belgium writer who produced 200 novels and numerous short stories. Of course from a mystery perspective he was best known for his creation of fictional detective Jules Maigret. His sales from the Maigret series are estimated to be twice as many as those of the Harry Potter books.

Georges Simenon was born February 13, 1903 in Liège, Belgium. However, due to prevailing superstition his birth was registered as the 12th of February.

In 1911, the Simenon family moved to a larger house where they took in lodgers. No doubt the influence of these lodgers helped Georges create his characters when he began to write fiction.

Georges used his father’s heart condition and the need to help the family as a reason to quit school. At the age of 15 he took a job at the Gazette de Liège. This newspaper experience taught him editing skills and the ability to produce stories quickly. He wrote 150 articles and published his first novel Au Pont des Arches in 1919 under the pen name G. Sim. He also produced hundreds of humorous pieces writing as Monsieur Le Coq. One of his mother’s relatives was the criminal Gabriel Brȕhl who was hanged for his crimes. Simenon would later also use Brȕhl as one of his pen names. 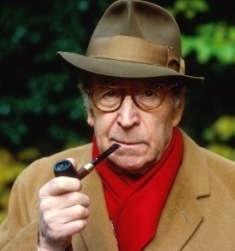 At the newspaper he was usually assigned human interest stories. These stories exposed him to the seamier side of life. He was known for his visitations with prostitutes and his drunkenness. He socialized with bohemians, anarchists and even some future murderers. He was often in the company of artists where he met his future wife, Régina Renchon (nicknamed Tigy).  After his father’s death in 1922 Georges along with Tigy moved to Paris. In 1929 they returned to Liège to marry.

A 1928 newspaper assignment sent Simenon on a sea voyage and he fell in love with boating. In 1929 he had a boat built named Ostrogoth.  Tigy, their dog, and their housekeeper Henriette Liberge who was nicknamed Boule moved aboard the boat and traveled the French canal system. Boule’s nickname meant ball and was a reference to her pudgy weight.  Boule who lived with the family for ten years is said to have been romantically involved with Simenon.

Between 1932 and 1936 Georges, Tigy and Boule moved to a manor house in Marsilly.  This was followed by his renting a villa in La Rochelle in early 1938 and later in that year he purchased a farmhouse in Nieul-sur-Mer. His son with Tigy, Marc, was born there in 1939.

During the Second World War, Simenon’s loyalties were called into question. The local farmers thought he was a Nazi sympathizer while the Gestapo suspected him of being Jewish. Most historians think he was simply apolitical. However, by the end of the war he was under investigation because he had negotiated film rights for his books with the Germans. In 1950 he was sentenced to a five-year period in which he was forbidden from publishing any new works.  This had little effect on the amount of work he produced or his later publishing credits.

In 1945 Simenon avoided more questions about his war loyalties by coming to North America with Tigy and his son. Boule was delayed in joining the family because of visa issues. The family spent several months in Canada and then traveled extensively throughout the United States. Simenon lived for a short time in Florida and then he rented a house in Arizona where Boule finally rejoined the family. The Simenons left Arizona for California and then returned to the East where they bought a farm in Connecticut.

Simenon made frequent trips to New York City where he met Denyse Quimet. She was originally from Montreal and she was also much younger than Simenon.  She was initially hired as his secretary but soon was involved in a relationship with him.

In 1949 Tigy and Georges were divorced and he married Denyse in 1950.  They had three children together. The family returned to France in 1955 and then settled in Switzerland. In 1964 he separated from Denyse. Teresa Sburelin, who was hired as a housekeeper in 1961 had also become romantically involved with the author. She remained with him until his death of natural causes at the age of 86.

While the Simenon children were strictly raised in the Catholic faith Georges continued to visit prostitutes and have numerous affairs including one reportedly with Josephine Baker. He once said he had slept with 10,000 women. Simenon claimed his fondness for prostitutes was necessary research for him to understand the working class that was the foundation for many of his stories.

Simenon was made a member of the Académie Royale de Belgique in 1952. For his most well-known work, a statue of Maigret was created in 1966 and placed where Simenon wrote the first Maigret novel. Many of the actors who had played Maigret on film joined Simenon at the unveiling. He remained a Belgian citizen throughout his life although he did not reside there after 1922. In 2003 he was honored with a commemorative Belgian coin “100 Years of Georges Simenon.”

Commissaire Jules Maigret made his first appearance in 1930 in a story for Detective magazine.

Maigret is a well-known and an accomplished detective that has moved up through the police ranks. He is described as being of average height, slightly overweight but not obese. Unlike his creator, Maigret is loyal to his wife. Her name is Louise but is always referred to in the stories as Madam Maigret. They had one child, a daughter, who died at birth. While the couple never had any additional children he is fond of the youngsters he encounters. He savors the home-cooked meals that Madame Maigret prepares and the time he spends with her. 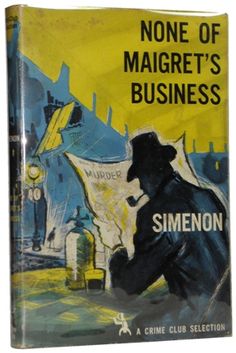 He prefers to take a police car or a taxi even for short distances. When he does walk he often gives his attaché case to a junior officer to carry and he prefers not to climb stairs. Maigret is easily spotted in his overcoat which he wears even in warmer weather and is rarely seen without his pipe.

He finds that smoking his pipe along with his frequent visits to pubs and cafés helps him to think. He has a fondness for beer and wine although he is never drunk.

He approaches his cases a little differently from other detectives. Crime facts are important for solving the case, but for Maigret the solution is more of a journey. He examines in detail the people and places surrounding the crime rather than just the gory details of the murder.

While his men are focused on the crime scene and interviewing the obvious suspects, Maigret will spend his time checking out the surrounding area. He will roam the streets of the city, town or village to see what is important in the lives of the people who live there. He might interview the concierge of a nearby building, or a retail shop owner. Of course there’s always the opportunity to stop at the local pub for a light lunch, a glass of wine and the gathering of information.

He tries to determine what made the criminal commit the crime. Along with Maigret, we discover a cast of characters that help to create a picture of what happened leading up to the crime.  Because his research provides a deep understanding of the criminal act he rarely passes judgment on the villain when he is finally captured.

Many critics feel that Jules Maigret ranks second only to Sherlock Holmes as one of the world’s best known fictional detectives. While Holmes relies on his deductions Maigret relies on his empathy and understanding of the human character.

For those of you that follow my blog, you know that in addition to reading mystery stories about the detective I enjoy watching films of the detective’s adventures.

Rupert Davis is probably one of the best known portrayers of Maigret and Simenon thought he was the perfect actor for the role. However, his appearance in 52 episodes for the BBC were filmed in the 1960’s and are no longer readily available. So when I was looking for a DVD, I selected a more recent British television version of Maigret.

The role of Jules Maigret is played by Michael Gambon. For those of you who are fans of the Harry Potter films you will recognize Gambon as the actor who took over the role of the wizard Dumbledore. In many ways Gambon brings the same calm demeanor and great wisdom to his Maigret cases as Dumbledore provided to Hogwarts’ students. 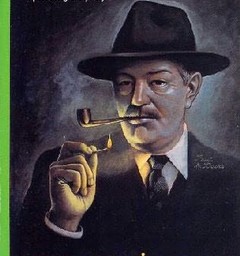 While Maigret is a French detective, this is a British version.  Most of the actors are English. Occasionally there are some French phrases along with street and character names. And of course the locations are those of French villages and cities. As previously mentioned Maigret spends a lot of time in pubs and cafés. These scenes very much reflect a French atmosphere. However, because Gambon is the right actor for the part I think he does the character justice even though he is not French.

This series was produced between 1992 and 1993. I think fans of Simenon and Maigret are ready for a new production. If PBS and other producers are listening, a new series would be appreciated by today’s mystery lovers.