The Value of Clues in Mysteries

It’s hard for me to believe that five years have passed since I started my Dark and Stormy Night Mysteries blog. During this time, I have written about mystery authors, characteristics of mysteries, crime methods, detectives and I even sprinkled in some mystery word search and crossword puzzles. However, the one overwhelming lesson I’ve learned is how many well written mysteries are available for our reading pleasure.

This brings me to one of my pet peeves about my favorite genre. I often read in articles that mysteries are not serious literary fiction. Yet the rules of writing both literary fiction and mysteries require that a story be told. In a mystery there is the crime, most often a murder. Then the author must take the reader from the crime to a solution through story telling.

Sue Grafton asked when being interviewed about literary fiction−”where is the story.” She went on to say that literary fiction often has a “meandering quality” and she only gives a book ten pages to hook her. I agree with her assessment.   So much of literary fiction meanders through scene after scene featuring the main character and their life experiences. Eventually after a wandering path we sometimes reach a conclusion.

However, there is one major story difference between literary fiction and mysteries. I believe this one difference hooks the reader and makes a mystery story more challenging to write. What is that difference? It’s the clues. 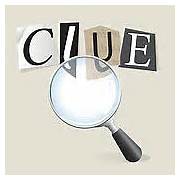 Sometimes in mainstream literary fiction there may be a secret where hints are given about what did occur or may occur within the story. In mysteries there’s no option not to give hints through the use of clues. These clues help to engage the reader.

As Ellery Queen would say it’s the reader’s challenge to see if they have been an astute reader in following the same information that’s presented to the detective. The reader is pitted against the detective with the same opportunity to solve the crime.

What is a clue?

By definition it’s a piece of evidence or information that helps a person find something or discover something which solves the mystery. A secondary explanation is that it is something that guides one through an intricate procedure or maze.

This explanation about helping a person through a maze comes from the origins of the word. The word clue is a late Middle English variant of ‘clew.’ The original meaning of clew was ‘a ball of thread.’ It referred to the idea that a string is used to guide a person out of a maze by tracing backwards following the string.

The most famous example of the word clew is that of the Greek hero Theseus. He killed the monstrous bull-headed Minotaur in its lair and then escaped from the Labyrinth. He was able to escape because the princess Ariadne gave him a ball of twine. He unraveled it as he went in and followed the twine back to find his way out again. From this original example the definition of clue was broadened to mean anything you follow to solve the problem or find a solution.

Clues have a dual purpose

Clues are designed to help the reader solve the murder. They put the reader on an equal playing field with the detective. If the author plays fair−and mystery authors should always play fair−the reader has the same information as the detective. There can be no surprise suspects that pop up in the last chapters, no finger or foot prints that are overlooked or no information that the detective forgets to mention.

These are the clues we all know because of TV shows that emphasize this type of evidence. They include footprints, fingerprints, blood splatter, strands of hair, pieces of fabric and all the other items that lend themselves to scientific analysis. 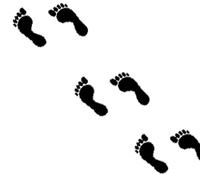 These clues are the items that are observed by the detective as they pursue the case. It may be the photo on the mantle of someone not seen for years or presumed lost. It might be an item spotted in the room at the time of the murder that has now disappeared. It might be observing that the lady who vanished filled a suitcase full of clothing and jewelry but forgot to take her underwear.

This may be one of the hardest clues for the reader to spot. They really have to be paying attention. It is usually slip of the tongue that no one but the detective notices. The suspect may say he never knew the victim. However, later a book in the library is discovered with an inscription from the dead man to the suspect. Or it might be the time table given by the suspect of their activity around the time of the murder.  The time table is very close but there’s just enough of a gap for the person to have committed the crime.

These clues of course bring to mind Agatha Christie’s Miss Marple. There was always a person from her village of St Mary Mead that’s a mirror image of someone involved in the current crime. She knows the psychology of how people behave and this is the clue that always leads her to the solution of the crime. For Quill in Lillian Jackson Braun’s cat mysteries there is the behavior of Koko, the Siamese cat, who provides a clue to what has happened or is about to happen.

I do read literary fiction all the time and there are many books and authors that I have enjoyed and recommended to others. However−you knew there would be a however −I love a book with a delicious murder and a story that challenges me to solve the puzzle. This challenge is enhanced by a series of clues and yes, even some red herrings woven cleverly into the story. For me, clues make mysteries a literary story worth reading.

This entry was posted in Blogs, Mystery Writing. Bookmark the permalink.