Mention the name of actor, Raymond Burr and most people will immediately respond− “Perry Mason.” Burr made his acting mark playing this television lawyer.  But ask this same audience the name of the writer of the Perry Mason stories and many people will struggle to remember −Erle Stanley Gardner.

Gardner is the prolific writer who created over eighty Mason stories along with two other lesser known mystery series Cool and Lam and Doug Selby and numerous other works.

Gardner attended law school in Indiana but only lasted about a month. He had an interest in boxing which included organizing illegal boxing matches. This endeavor resulted in his suspension from school.

He came home to California where he secured a job as a typist at a law firm. Without any formal schooling, but with the knowledge he learned at the law firm and self-study he passed the bar in 1911. He opened a law office in 1917, but soon closed it for a better paying sales job. By 1921 he returned to the practice of law and was a partner at the firm of Sheridan, Orr, Drapeau and Gardner where he remained until 1933.

As a lawyer, Gardner preferred case strategy and courtroom tactics and was bored by other elements of law. His preference for strategy and tactics are clearly found in his stories.

As the Mason novels became more popular Gardner reduced his contributions to these magazines. Of course, by the 1950’s the pulps were also on their way out.

The Perry Mason stories are the largest body of work that Gardner produced. And the Mason books rank third in the top ten list of best-selling series.

As a young boy in Massachusetts Gardner read a magazine called the “Youth’s Companion” which was published in Boston by the Perry Mason Company. It was from this company that Gardner took the name for his Perry Mason character.

The Mason stories tend to follow a set formula with a wrongly accused client seeking Mason’s help. Then Mason and Drake investigate.  The guilty party is usually revealed during the preliminary court proceedings. In addition, other crimes like blackmail, embezzlement, missing persons and fraud are often discovered along with the solution for the current murder.

Although most of us probably picture someone who looks like Raymond Burr when we think of Perry Mason, very few descriptive details are presented in the stories. He leaves the true description of Mason to the reader’s imagination. We also know very little about Mason’s private life. He lives alone in an apartment and his only romantic interest seems to be Della, although this relationship is never fulfilled. We actually know more about Mason’s food likes because many scenes take place in restaurants.

Mason is also a very good detective. In The Case of the Caretaker’s Cat, District Attorney Hamilton Burger says “You’re a better detective than you are a lawyer.” It’s not enough for Mason to simply get his client off.  He needs to solve the crime.

In the 30’s Warner Brothers purchased the film rights for several of the Mason novels. However, Gardner was not thrilled with the results. In one film the emphasis was on Mason as a Latin lover. In another, film he marries Della Street. In all the films, Mason acted as a lighthearted detective solving the crime with no courtroom trials. Some of the actors portraying Mason in these films were Warren William, Ricardo Cortez, and Donald Woods. These films were purely entertainment without emphasis on the legal element.

Even though his experience with Perry Mason movies was not a positive one, Gardner decided to put Mason on the radio. The Perry Mason shows were developed as part of detergent giant Proctor and Gamble’s afternoon soap operas or as they became known − “The Soaps.” These shows were extremely popular and built a large audience.

By the time audiences were switching from radio to television, Perry Mason was at the top of the radio ratings.

CBS approached Gardner about turning Perry Mason into an afternoon soap opera for television. Gardner refused, but CBS did create the long running soap, The Edge of Night starring John Larkin. Larkin had been the voice of Perry Mason on the radio and later had guest appearances on the Mason television series.

In 1957, CBS again approached Gardner for a television show featuring Perry Mason. Gardner along with actress Gail Patrick (Jackson) and her husband, Thomas Jackson (Gardner’s literary agent) formed a production company. This provided Gardner with the creative control he wanted. 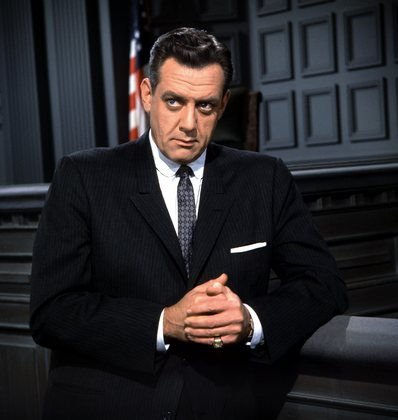 Canadian actor, Raymond Burr, was chosen for the starring role. Burr had originally auditioned for the role of Hamilton Burger. However, once Gardner saw Burr he said Burr was the character he had in mind when he created Mason. Paul Drake was played by William Hopper, the son of Hollywood gossip columnist Hedda Hopper. Della Street was played by Barbara Hale who also appeared in several Falcon
movies. And many future stars had early appearances on the series including Burt Reynolds, Robert Redford, Cloris Leachman, Leonard Nimoy, Dick Clark, Angie Dickinson and even the genie herself, Barbara Eden. In the final episode of this series, The Case of the Final Fade-Out, even Gardner had a cameo appearance as the judge

[Note: Barbara Hale was the last remaining star from the original series and just passed away in January (2017) at the age of 94.]

For one season from 1973-1974 a second television series was produced featuring Monte Markham as Mason. Then in 1985, thirty new episodes were created. The series once again featured Raymond Burr as Mason with Barbara Hale as Della Street and ran until 1995. Barbara Hale’s son, William Katt played Paul Drake. For new generations of viewing audiences, the original and the later series featuring Burr can still be seen on television. And HBO recently announced the possibility of a new series featuring Robert Downey Jr. So, stay tuned for more Perry Mason.

Doug Selby is on the opposite side of the legal system from Perry Mason. He is a newly elected District Attorney who works crime cases with the newly elected Sheriff, Rex Brandon.  In the first book, The D.A. Calls It Murder, Selby must not only solve the murder with reluctant witnesses but face constant criticisms from a hostile and corrupt press. 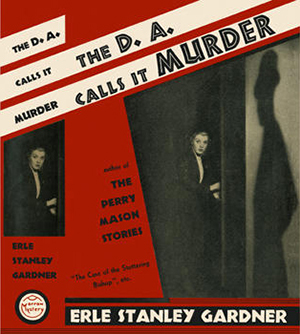 His antagonist in many of the stories is Alphonse Baker (A.B.) Carr. Unlike Mason, he’s a shyster whose clients are usually guilty.  There are nine Selby books, a radio episode and a television film. The television film starred Jim Hutton who also played Ellery Queen in the television series.

Cool and Lam was a series about a detective agency that Gardner wrote using the pseudonym A.A. Fair. He produced twenty-nine books featuring Bertha Cool and Donald Lam starting with The Bigger They Come (1939).

Bertha Cool takes over the detective agency after her husband’s death. She is described initially as being overweight with white hair, miserly, but persistent.  In the first novel, she hires Donald Lam as an operative who does the leg work for the agency.

Lam is not your typical hardboiled detective. He doesn’t weigh much and is constantly getting beat up. He doesn’t carry a gun for fear of losing it during a fight. However, like a true hardboiled detective he has his own code of justice which doesn’t always include following the normal legal process. Although, he wants a partnership in the agency, Lam doesn’t receive it until after he leaves the team and Bertha finally realizes how valuable his skills are to solving the crimes.

One final note about this series. The Knife Slipped which was written in 1939 as the second book in the series was lost among Gardner’s papers. When it was discovered it was finally published in 2016.

Gardner did a great deal of radio work where he created characters such as Christopher London in 1950 (played by Glenn Ford) and characters for a Life in Your Hands which aired from 1949-1952.

Gardner also spent many hours working on a project called the “Court of Last Resort.” Working with legal, forensic and investigative experts, the project reviewed criminal cases and sought to reverse miscarriages of justice. Gardner wrote a book about the project’s work and won an Edgar Award in the Best Fact Crime category. The project was also made into a television series.

In addition to his fiction work, Gardner wrote documentaries about his travels through the Baja California peninsula. He loved the area and traveled extensively writing about his explorations. When he passed away on March 11, 1970 at age 80, his final instructions were that he was to be cremated and his ashes scattered over his beloved Baja peninsula.

Gardner married Natalie Frances Talbert in 1912 and they had one daughter, Grace. Gardner and Frances separated in the early thirties, but never divorced. After her death in 1968, Gardner married Agnes Jean Bethell who had been one of his secretaries since 1930.

Gardner typed his stories on a typewriter using only two fingers.  Of course, as he became more famous he dictated his writing to a team of secretaries.  Jean had two sisters Peggy and Ruth who also worked as Garner’s secretaries. It is said that Jean, Peggy and Ruth inspired Gardner’s creation of Della Street.

The massive volume of work produced by Gardner makes him stand out from other crime and mystery writers. At the time of his death, he was the best-selling American writer of the 20th century.

With his courtroom stories, Gardner established a format that has continued to influence legal dramas through today. Gardner’s lawyers were more than the legal arm of the law. They were detectives who helped solve crimes. More importantly they insured that justice was done for both the innocent and the guilty. And like his Perry Mason TV series Gardner’s work continues to live on for new readers

This entry was posted in Blogs, Mystery Characters, Mystery Writers. Bookmark the permalink.