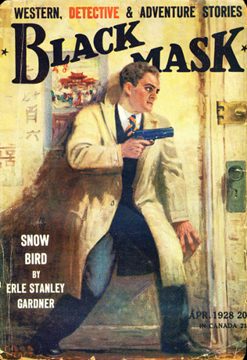 In a previous blog we discussed pulp magazines as an important publishing outlet for many writers and especially writers of mystery and detective stories. In this blog let’s focus on one of the more popular of these magazines–Black Mask.

The Black Mask was launched in 1920 by H.L. Mencken and George Jean Nathan with an investment of five hundred dollars. I’m fond of this magazine for two reasons:  first, I live near the city of Baltimore and one of the founders, H.L. Mencken, a writer with the Baltimore Sun, remains a journalistic idol. Second, it’s the magazine that published the stories of Daly, Hammett, Gardner and Chandler and was known for developing the hard-boiled detective.

The magazine was started by the founders to generate dollars to support their literary magazine Smart Set which did not make money. Originally, The Black Mask was not dedicated to crime fiction but actually five magazines in one. According to the publishers the magazine offered the best available of adventure stories, mystery and detective stories, romance stories, love stories and the best stories of the occult.

After producing just eight issues, Mencken and Nathan sold the magazine for $12,500 to Eltinge “Pop” Warner and Eugene Crowe, the publisher’s of both The Black Mask and Smart Set magazines. They published the magazine for two decades and during their ownership they moved the focus to hard-boiled stories filled with action.

Joseph Shaw was appointed editor in 1926 and promptly dropped “The” changing the magazine’s name to Black Mask. Shaw was an excellent editor but he was also known for his ability as a great writing coach and for seeking out new writers for the publication.  Although the magazine continued to publish some adventures and westerns, Shaw began to feature less of these genres and more and more of mystery, crime and detective stories.

Additionally Shaw often wrote editorials for the magazine on crime related topics like the jury system and gun control. He believed crime fiction had a moral responsibility. He held that criminals were always caught and that villains always received just punishment.

The detective stories appearing in Black Mask were more violent than other magazines. The detectives were wise-cracking and hard-boiled who often imposed their own version of justice on the criminals.

By December 1933 the magazine was publishing only crime stories. Its circulation had risen from 66,000 to over 103,000 per issue with a cover price of twenty cents.

The magazine now had lots of competitors and circulation by 1935 had dropped back to 63,000. The owners wanted to cut the writer’s pay to offset the loss of subscribers. Shaw objected to this move and when the feud escalated he was fired. Many of the writers he recruited went with him when he left.

The first issue of 1937, after Shaw’s departure, listed F. Ellsworth as editor. The “F” stood for Fanny. Unlike Shaw who favored the hard-boiled detective, she wanted a softer and more emotional detective. These were the depression years and the action detective was replaced by a crime fighter who was often powerless against forces beyond his control but persevered to search for the truth. Even with this new approach the magazine continued to lose circulation and was sold to its competitor Dime Detective in 1940.

The End of Black Mask

Another editor was brought in who tried to return the magazine to the hard-boiled detective days of the past. During World War II the owners featured stories on spies and sabotage, designed covers with more sex and violence, reduced the size, raised the price and lowered the numbers of issues published annually. But like all pulp magazines they were up against the change in the reader’s habits. Readers now listened to radio, went to movies, read comics and bought cheap paperbacks. The magazine struggled through the 40’s and eventually ceased publication in 1951.

In 1985 there was an attempt to revive the magazine under the name The New Black Mask and featured noted crime writers like James Ellroy, Michael Collins and Sara Paretsky. The magazine also reprinted the original stories of Dashiell Hammett and Raymond Chandler. However, the magazine stopped publication in 1987 when they faced legal issues concerning the use of the name.

One of the early contributors to the magazine was Carroll John Daly. Although Daly is best known for his character Race Williams, considered the first hard-boiled detective, Daly’s first “tough” detective story was Three Gun Terry featuring Terry Mack. Daly along with Dashiell Hammett is considered the writer of the original hard-boiled detective story. Hammett’s first published story in Black Mask in 1922 was The Road Home, although he published it using the pseudonym Peter Collinson.  Erle Stanley Gardner’s first story, The Shrieking Skeleton was also published under the pen name of Charles M. Green and Raymond Chandler’s first story Blackmailers Don’t Shoot was published in 1933. The magazine also featured complete novels serialized over several issues starting with the September issue of 1929 featuring the first installment of The Maltese Falcon.

The Importance of Black Mask

Black Mask had an important role in the history of detective stories. It was an incubator for the development of the detective genre but it was also an outlet for many of the best crime writers to get their stories before the reader. During its existence over 600 authors were published in Black Mask and readers were entertained with more than 2,500 stories.