For those of us who enjoy the mystery programs presented on PBS they have added another great series to their repertoire—Miss Fisher’s Murder Mysteries.

This show is an Australian production that provides a glimpse into high society life after World War I. The time period when we reached a “lasting peace” and the population was ready for and embraced the freedom of the roaring twenties.

Many things have changed as a result of the war, including the financial circumstances for Miss Fisher’s family. While her family during her youth struggled to exist, they now have unlimited wealth. The members of her family with title and fortune did not survive the war years. 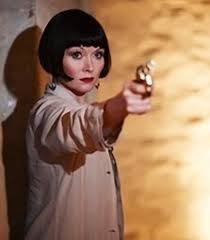 experiencing after the war they helped to win. She is wealthy, worldly and just happens to be a lady detective.

In the first television series Miss Fisher returns to Melbourne to keep the man who is believed to have killed her sister confined to jail. This criminal’s presence weaves in and out of several episodes until the final dramatic confrontation. In the last episode of season one we finally learn what happened to her sister.

The episodes are savvy, spirited, and face paced. The crimes are solved by a woman whose knows no boundaries whether financial, sexual or pure danger. Episode topics are edgy and plots include rape, abortion, incest, homosexuality, drugs, slave trading and always murder.

Phryne is very unique and takes full advantage of her new lifestyle. She drives a Hispana- Suiza car. She carries a gold plated pistol. She attends society’s social events and the theater but can also be seen at the docks of Melbourne and on the dark streets of Chinatown. And regardless of the event she wears the right outfit—the perfect gown for dancing the tango, the right business dress for following clues and of course multiple outfits with trousers for chasing criminals. It’s worth watching the shows just to see the outfits.

This delightful series is based on the books written by Kerry Greenwood. As a reader of mysteries I was curious to see if the books were as entertaining as the series.

I won’t keep you waiting for the answer—they are. The story plots and characters are not an exact match for the TV series. However, all of the elements are there. The stylish behavior, the devil-may-care attitude, the sexual exploits and of course crime solving is part of every story.

When the books were first published there were some readers who felt the works were scandalous. Phryne’s propensity to bed any male companion whenever the mood struck regardless of social, ethnic or financial background offended some. 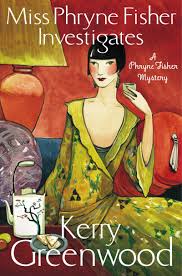 However, Greenwood defends the behavior by pointing out that Phryne is no different than her male counterparts like James Bond or The Saint. Readers don’t have objections to this same behavior when it is displayed by male spies and detectives.

She also points to the historical times. Phryne like many women served in World War I. She was in the ambulance brigade in France and was decorated for her courage. She also saw a great deal of sorrow and pain. She emerges from the war into the Roaring Twenties where pleasure was the new cause of the day.

Greenwood has written twenty books featuring her detective and filming of Season 3 for the PBS series is complete. If you haven’t seen or read a Miss Fisher murder mystery take the plunge into one of these delightful faced paced mysteries.

This entry was posted in Blogs, TV Shows. Bookmark the permalink.