Who Is G.K. Chesterton

Gilbert Keith (G.K.) Chesterton was an English writer, lay theologian, poet, philosopher, dramatist, journalist, art critic, biographer and last but not least mystery writer. For the American mystery fan he is best known as the author of the Father Brown Mysteries.

Chesterton was a very prolific writer having produced 80 books, several hundred poems, 4,000 essays and five plays. In 1931, Chesterton was invited to give a series of radio talks. After his initial hesitation, Chesterton went on to deliver 40 talks per year from 1932 until his death. He also penned over 200 short stories which included the Father Brown series. Father Brown was never presented as a full length book but always as a series of short stories.

Early in his life Chesterton showed a talent for art. He studied art and had planned on becoming an artist. When this career did not work out, Chesterton became an art critic for the Daily News. He wrote a weekly column for thirteen years. He then moved on to a weekly column in the Illustrated London News which he continued to write for thirty years. And he wrote for his own paper G.K.’s Weekly, plus articles for the Encyclopedia Britannica.

Chesterton was able to talk and write about most subjects. He maintained certain beliefs and was able to clearly express them. Chesterton often enjoyed a good debate and spared with thinkers of the day like Bertrand Russell, George Bernard Shaw, Clarence Darrow and H.G. Wells. He often had opposite viewpoints from his friends but he defended them with knowledge and passion.

The Personality of Chesterton 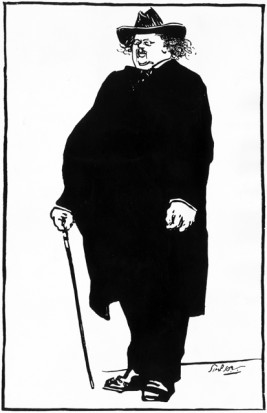 His physical characteristics stood out as much as his writing. Chesterton was a large man at 6’4” and weighing between 285 and 300 pounds. He usually wore a cape and crumpled hat set off by a swordstick. His small glasses sat on the end of his nose with a cigar hanging from his mouth.  On one occasion Chesterton remarked to his friend George Bernard Shaw, “To look at you, anyone would think a famine had struck England.” Shaw responded by saying “To look at you, anyone would think you had caused it.”

Chesterton also had a habit of getting lost. He often had to call his wife to see where he was supposed to be. As a result, it is said that he did much of his writing in train stations while waiting for the train he was supposed to be riding. This huge man was the first to laugh at his own jokes and entertained children by catching buns in his mouth.

However, let’s not forget Chesterton is considered one of the deepest thinkers who ever lived. And this is the man who gave us the Father Brown Mysteries.

Father Brown is a devout clergyman performing all of the functions of that role. He is quiet and humble. He applies his knowledge of people and his religious beliefs to solving crimes. He often looks for a ‘sign’ to guide him in the right direction, although he does not discount science and fact. He is educated, has a razor sharp intellect and possesses great wit. It is believed that the Father Brown character is very close to Chesterton’s own view of the world.

In the first Father Brown story The Blue Cross, we discovery his methods for detecting. He is more intuitive than deductive. This is in direct contrast to another well known detective of the time— Sherlock Holmes. Holmes relies on pure deductive reasoning to solve his cases.

Father Brown reminds me in some ways of another detective—Miss Jane Marple. Miss Marple solves her crimes by comparing people and events to what occurs in her small village of St. Mary’s Mead. Father Brown understands the psychology of human behavior based on what he has learned from hours of listening to parishioner’s confessions.

Father Brown and the Criminal’s Soul

Unlike other detectives Father Brown is more concerned about the criminal’s soul and not his crime. The criminal’s spirituality is more important than bringing him to justice. When faced with punishment through the criminal justice system or natural law he allows events to take their course.

Several stories concern the characters weakness for assuming an unusual occurrence has been caused by some super natural force. However, Father Brown always assumes this is not the case and searches for the rational explanation.

Chesterton’s writings displayed great wit and this trait is also apparent in Father Brown’s character. Like Chesterton Father Brown is a bit crumpled in his appearance, and while he does not carry a swordstick he is rarely seen without his trusty umbrella.

And now once again we are being treated to Chesterton’s stories in a new PBS series featuring Father Brown.

Father Brown is played by Mark Williams who brings a jovial kindness, along with religious authenticity to his portrayal of the Catholic priest for St Mary’s church. He rarely appears in anything other than his black cassock and of course is seen with the trademark umbrella. He doesn’t drive and his favorite mode of transportation is a bicycle.

While most of Chesterton’s stories take place in London, the PBS series is filmed in the Cotswold section of England in the fictional village of Kembleford. In this small village Father Brown is available to help his parishioners, non- parishioners and even non-believers who find themselves in trouble. He is educated, religious and skilled at solving crimes.

Father Brown is supported by a team of ladies. Mrs. McCarthy, played by Sorcha Cusack, is the parish secretary and tries to keep the Father on the straight and narrow. While she is loyal to Father Brown, she feels it is her duty to make sure the strict rules of the church are followed. Mrs. McCarthy also feels by serving tea along with her award winning strawberry scones she can solve many problems.

The second woman on Father Brown’s team is a Lady. In fact she’s a countess. Lady Felicia Montague, played by Nancy Carroll, is a free spirit socialite with a roving eye. She has the money, the social contacts and the charm to assist the Father with any investigation. She is equally loyal to Father Brown and often finds herself in conflict with Mrs. McCarthy as to who can best serve him.

The Men in the Father Brown Series

The men in the series are from opposite sides of the street. Lady Felicia’s chauffeur, Sid Carter, when not driving her Roll Royce dabbles in the Black Market. Sid possesses some additional skills like lock picking, horse betting, fighting, and pick pocketing often enlisted by Father Brown to help solve his cases.

The other male leads in the series are the two police inspectors—Inspector Valetine (series one) and Inspector Sullivan (series two and three). Initially neither inspector appreciates Father Brown’s interference in their cases, but each comes to respect his talents for solving crime.

In between the shenanigans of Sid, the flirtations and social responsibilities of Lady Felicia and the parish duties of Mrs. McCarty there are crimes to be solved. And under the ecclesiastical guidance of Father Brown a solution is always found.

Take a Dive for Murder: http://amzn.com/B00GPD9PJI

This entry was posted in Blogs, Mystery Writers. Bookmark the permalink.