Leslie Charteris–Creator of The Saint

Those of us who love mysteries are living in a splendid time. There are so many channels and streaming options available to help the mystery lover, like you, find a movie or a television show representing the genre. One of the channels I’m enjoying is showing the television series The Saint starring Roger Moore. And there are also a variety of channels featuring the movies with George Sanders and other actors playing this famous detective. With so much personal enjoyment I wanted to find out more about the author, Leslie Charteris, who created this much-loved character.

Leslie Charteris was born Leslie Charles Bowyer-Yin in May 1907 in Singapore to a Chinese father, Dr. S.C. Yin, a surgeon, and an English mother Lydia Florence Bowyer.

In 1926 he legally changed his name to Charteris, and one report states he chose that name from a Colonel Francis Charteris. But this Charteris was a despicable soldier from the 1600s, charged and convicted of rape. Leslie Charteris’s daughter disputes this claim and states that her father chose this name from the phone directory. It was not from Francis Charteris, or a combination of names and didn’t have any other special meaning.

Charteris started writing at an early age. He created a magazine to showcase his articles, short stories, poems and even a comic strip.

In his first year at King’s College, Cambridge, Charteris wrote a book and left the university to pursue his new writing career. His goal was to have a career he loved while attaining financial wealth. However, the road to achieving this was not a direct path. While writing thriller stories, he worked in a tin mine, and on a rubber plantation, prospected for gold, dived for pearls, drove a bus and toured with a carnival around England to name a few of his job experiences.

Simon Templar appeared in short stories, novellas and full-length novels, and in a syndicated comic strip.

Charteris wrote two previous novels before completing his third book Meet the Tiger (1928) where the Saint makes his first appearance. However, Charteris was not happy with this book as the introduction to the Saint. Instead, he maintained the Saint series really launched with the second book Enter the Saint (1930).

Simon Templar Emerges as The Saint

On the origin of the Saint….

“Who knows where an idea comes from? The Saint was just originally a character who came to life in my head not so long after I started writing, but he was not the first character I thought of. He was, as a matter of fact, the fifth. I went on and created two or three other characters, each of them in an individual book. And then I suppose I got lazy, or I got the idea that it was better to continue and build up one character than to spread yourself around among a dozen. I looked back over the characters I had created so far and picked the Saint, liked him the best, and decided to go on with him.”

When asked how he chose the name Templar, Charteris credited his childhood fascination with the Knights of the Round Table. Aside from the swords and the battles, this was the age of chivalry with a special code of justice. The name Templar is reminiscent of this era and his behavior matches that of a knight fighting the good fight.

What are the origins of Templar’s nickname, the Saint? There isn’t a definitive explanation, but we learn from the writings he began using the name at nineteen. Charteris provided no further explanation.

Characteristics of the Saint

The saint lets people know he’s made an appearance by leaving a calling card with the stick figure of a man with a halo over his head. He is humorous, debonair with a saintly smile and remains calm and collected in the direst of situations.

Perhaps his cool and collected manor is because we are told he is British. But in the first book Meet the Tiger there are hints that he spent time in America fighting the bootleggers of prohibition.

Simon Templar’s nickname was the saint, but we also knew him as the “Robin Hood of modern crime.” The Saint’s mission is to beat criminals at their own game. And if there is a reward for the criminal’s capture or the opportunity to seize some other spoils because of his work, Templar sees this as his just reward for eliminating the bad guys. But he is also generous in sharing the proceeds with his colleagues, victims and charities.

He targets those who prey on individuals who cannot fight back. The targets can include the criminal class, corrupt politicians or even the Nazis. Like the hardboiled detectives of a later era, Templar exacts his own form of justice and is not above killing the villain. Achieving his form of justice has him walking a fine balance between bringing criminals to justice and the law.

The Saint on Radio

In the US we first heard a radio broadcast of the Saint in January 1945. This was a quick series which starred Edgar Barrier with Bromo-seltzer as the sponsor and ended on March 31, 1945. Broadcasters started a second series in June 1945 as a summer replacement show featuring Brian Aherne with Campbell soup as the sponsor. The third version started July 1947 but was heard only on the CBS West Coast network. This time producers tapped Vincent Price for the role of Templar and Lever Brothers was the sponsor. Vincent Price continued to play the role as it switched between several radio networks. The show relied on the Ford Motor Company for financing until the series finally ended in October 14, 1951. Besides Vincent Price, Tom Conway, George Sanders brother, briefly played the role along with Barry Sullivan.

Charteris approved the selection of Vincent Price as the voice of Simon Templar and tailored many of the scripts for his talent. For the stories he didn’t write, Charteris oversaw the scripts. He also scripted stories for the Sherlock Holmes radio series with Basil Rathbone and Nigel Bruce.

The Saint in the Movies

While Simon Templar was a popular character in literature, the goal of having the Saint appear on the big screen eluded Charteris. Finally, between 1938-1943 RKO produced eight films. The first film was The Saint in New York starring Louis Hayward based on the Charteris novel of the same name. Jonathan Hale played Inspector Henry Farnack who was the American version of Claud Eustace Teal the Chief Inspector with the British police. 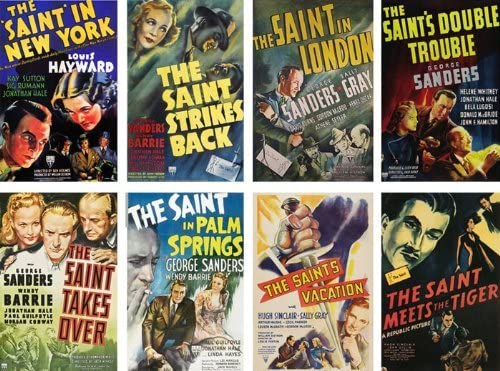 Charteris was not happy with the RKO Saint movies because he felt the scripts were not true to the original stories. Charteris continually annoyed RKO and as the feud developed RKO stopped making the Saint pictures. They replaced it with a new series featuring an equally suave detective -the Falcon. And believe it or not, RKO tapped George Sanders for the role. He did three films before being replaced by his brother, Tom Conway.

Charteris sued RKO for copyright infringement, claiming that the Falcon was merely a duplicate of his character. George Sanders had already established the character of the Saint, and with Sanders playing the new role it strengthened the case against RKO. They did not release the details, but RKO settled the suit. The suit delayed the release of The Gay Falcon (1941) until 1943.

Charteris mentions the Falcon in his novel The Saint Steps In. When the suggestion of attending a Falcon movie comes up between the Saint and his lady friend, the answer is why watch someone doing “a bargain-basement imitation.”

The Saint on TV

From 1962 to 1969 Roger Moore played the part of the Saint in the British production. Prior to accepting the lead role, Moore wanted to produce the shows and tried to buy the rights to the books. Later, Charteris sold the rights to Robert S. Baker and Moore became one of the co-owners.

When the series started, the creators based many episodes on Charteris’s short stories. Later, when other writers created the scripts, Charteris turned some of these scripts into novels or collections of stories published under his name.

For the viewer, the Saint travels throughout the world, but they filmed most episodes on sets at the Elstree Studios in England. The studio used blue screen technology, superimposed different backgrounds or painted moveable scenes to create different locales. For a few episodes, the studio sent doubles to locations where they were filmed from a distance and not identifiable as Moore.

As in the books, the TV series portrays Templar as the hero helping to bring the criminals to justice and protect the victims who find it difficult to fight the bad guys. But to do this Templar often needs to skirt the law. Two of the policemen he interacts with are Inspector Teal (featured in 26 episodes) and Colonel Latignant (featured in six episodes). In the books, the police are as smart as Templar but focus on the wrong piece of information to solve the crime. In the television series, these two policemen along with others are presented as bungling and incompetent. Regardless of their interaction, by the end of the episode they appreciate the Saint’s help.

In early episodes, at the beginning of the show, Roger Moore addresses the audience directly to set the scene. When the episodes switched to color, in the opening scene someone recognizes the Saint and a cartoon-like Halo appears above his head.

Charteris Becomes a Citizen of the United States

In 1932, Charteris moved to the United states and spent time in Florida and Hollywood. While he continued to write and publish short stories, he was also a screenwriter for Paramount Pictures. For example, he worked on the film about London jewel thieves called Midnight Club starring George Raft.

The United States prohibited Charteris from permanent residency because of the Chinese Exclusion Act. This law prohibited immigration for persons of “50% or greater” Oriental blood. Because of this act, Charteris continually had to renew his six-month temporary visitor’s visa. Eventually, an act of Congress granted his daughter and him the right of permanent residence in the United States, with eligibility for naturalization. He became a US citizen in 1946.

The Saint appeared in nearly 100 books. Charteris wrote his last Saint story in 1963 with The Saint in the Sun, but he approved and edited stories ghost written by others which continued the brand. In 1964 Vendetta for the Saint was published and Charteris took credit as the author, but science fiction writer, Harry Harrison wrote it. He also wrote for and edited The Saint Mystery Magazine. In 1983, Salvage for the Saint was the last book published in the series.

Leslie Charteris books are still in print. The movies and the Roger Moore television series are available on DVD. And if you prefer to watch the Saint, on your TV or other device, check your local cable channels and streaming networks for the opportunity to catch a movie or television show of the Saint in action created by Leslie Charteris.