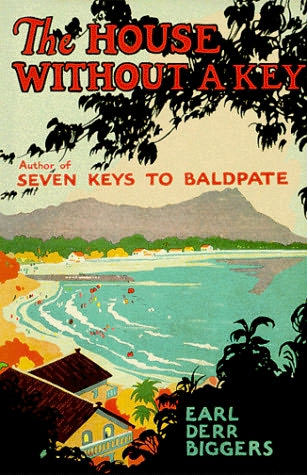 Earl Derr Biggers was born in 1884 in Warren Ohio and was an American novelist and playwright. However he is primarily remembered for his books featuring the fictional Chinese-American detective Charlie Chan.

Biggers graduated from Harvard University in 1907 and by 1908 was hired at the Boston Traveler to write a daily humor column. It is said that this daily humor column helped him develop the witticisms that we later hear from detective Chan. This was also the place where he met his future wife, Elanor Ladd who would have a great influence on his writing.

Following the humor column Biggers became the paper’s drama critic. His reviews were incredibly blunt, too blunt and in 1912 he was fired. However, this job loss proved beneficial since it provided him with the time to work on his novel.

His first book Seven Keys to Baldpate was published in 1913.  George M. Cohan bought the dramatic rights and produced a stage play that enjoyed a lengthy run. This one book over the years was made into nine films (two under different names).  The 1917 film version featured a rare screen appearance by Cohan.  Then in 1935 Cohan wrote his own film version which is perhaps the most remembered of all the films produced. The popularity of this first novel lasted for over 30 years and the financial rewards allowed Biggers to earn his income as a writer but perhaps more importantly provided him with the financial stability to marry Elanor Ladd.

His next books Love Insurance 1914 and The Agony Column 1916 assured his success as a novelist. Love Insurance was also turned into the successful play See-Saw. Biggers threw himself into the role of the dramatist. He became more involved with the stage productions of his plays and the demands from this additional workload drained him physically.

In an attempt for a change in a more relaxing climate Biggers and his wife visited Hawaii in 1920. It was while he was on vacation in Honolulu that Biggers began to develop an idea for a new kind of hero.

However, it wasn’t until 1924 that Biggers decided to write a mystery novel with Hawaii as the location. He visited the library to do research and to help him recall the memories of his island visit. At the library Biggers read a newspaper story about the work of Sgt. Chang Apana of the Honolulu police and his unique approach to crime fighting. Charlie Chan is loosely based on this real-life Honolulu detective and he first appears in 1925 when The Saturday Evening Post carried the first installment of The House without a Key. The story was soon published by Bobbs-Merrill as a hardcover novel.

A Chinese detective portrayed in a positive light was a major departure from prevailing attitudes of the time towards the Chinese. Chinatown was always shown as a place that housed wicked Chinese villains like Fu Manchu, the Chinese Tongs and Opium dens where crimes went unpunished.

Chan in this first book was not the central character of the story and was not mentioned on the book cover. (See cover above) The main character of the book was a young Boston native John Quincy Winterslip. While Winterslip was the romantic interest in the book it was Chan that captured the reader’s attention.

Detective Charlie Chan is called upon to solve a murder committed at a beach house and ends up saving Winterslip’s life.  Chan is described as being very fat and walking with a light dainty feminine step. Clearly these are not the characteristics of the stereotypical chinese male.

Chan is accommodating and unthreatening and Biggers once commented, “It struck me that a Chinese hero trustworthy, benevolent and philosophical would come nearer to presenting a correct portrayal of the race.”  Chan like many Golden Age detectives was known for his powers of observation, logic, and personal humility which made him an “honorable” man.

Positive public reception led to the second book The Chinese Parrot. Then a third Chan story followed called Behind That Curtain. The Saturday Evening Post paid $25,000 for the serial rights to this third book which was a huge sum at that time. The first two stories had been made into silent films and Fox purchased the right to this third story.

While Biggers was happy with Charlie Chan’s success he was concerned that the public would only want books about the detective and limit his writing options. However in 1929 when the stock market crashed Biggers relied on a proven product and produced his fourth Chan story The Black Camel.

For Biggers fifth novel Charlie Chan Carries On Fox again purchased the film rights and unlike previous unsuccessful films featuring Asian actors this production would star an American actor, Warner Oland. The Keeper of the Keys in 1932 would be Biggers final Charlie Chan mystery. This book was made into a play and opened on October 18, 1933 closing only one month later.

Earl Derr Biggers died of a heart attack on April 5, 1933 at the age of 48. Biggers was a master of plot and characterization and incorporated humor and timing in his Chan character.  Biggers six Charlie Chan novels continue to hold their own among mystery fans.

Today Charlie Chan is perhaps less known for the books that featured him compared to the large number of movies that were produced with Chan as the lead detective. We’ll talk more about Charlie Chan movies in the next blog.