It’s generally accepted that Earl Derr Biggers enhanced the image of the Chinese race with his portrayal of Charlie Chan in his books. The character he developed was not the stereotypical evil China man from the underbelly of Chinatown. Instead Chan was a hard working middle class policeman with many children and a loyal wife who maintained his Honolulu home while he traveled the world solving crime. He was smart and smarter than his police counterparts and the villains he captured. He was humble, polite and patriotic often pointing out he was not Chinese.

Biggers’s books were made into movies without controversy and were very successful both in America and China. However, in more recent times, especially when Fox wanted to do a Charlie Chan Film Festival in 2003, controversy developed surrounding the casting and the roles of the actors.  What are the movie issues?

The first criticism is that an Asian actor did not play the part of Charlie Chan. This is not completely accurate since the first movies did feature Asian actors. However, these films were not box office successes. Additionally, the studio felt that just because an actor wasn’t Asian didn’t mean he couldn’t play a particular role. A good actor can play any role.

Second there is controversy surrounding the portrayal of African American characters in the films. They are placed in positions where they are often silly and sometimes appear stupid. However, others will defend these portrayals as simply part of the comic relief format always included in the films.

In Charlie Chan in Honolulu on board the ship are a lion tamer and his wandering lion that provide the comedy for this film. In The Black Camel the assistant policeman, Kashimo, runs around like a fool finding ‘clues’ to impress Chan. This same format is used when one of Charlie Chan’s children appear in the film as “Pops” assistant. The kids are usually following the wrong clues and provide humor as they interfere with the older and wiser parent’s solution of the case. And when African American, Mantan Moreland, appears as Birmingham Brown he is usually frightened by the crime and spends his time running from the murder scene and the suspects. This portrayal is not complimentary but follows the same comic relief pattern. The portrayal of African American and Asian characters was influenced by the times and although the times are no excuse they do help to provide an explanation.

A Closer Look at the Films

There were three early film versions of Charlie Chan from 1925-1929 each played by a different Asian actor. Then 44 movies were produced from 1931-1949 with three different American actors.

The first two Chan novels were made into silent movies by Pathé Studios and Universal Pictures and then Fox film Corporation paid a handsome sum for the rights to the third Chan, Behind that Curtain. In this film version Charlie is played by E.L. Parks an Asian actor. However, the movie focus is on a Scotland Yard inspector and Chan only plays a minor role. In fact Chan doesn’t appear until the very end of the picture in time to nab the bad guy. 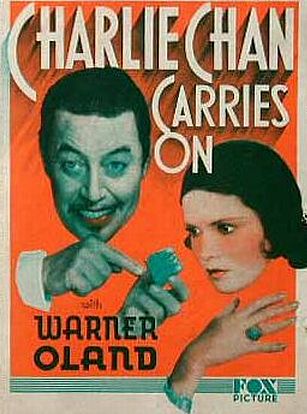 The fifth Chan novel Charlie Chan Carries On was also purchased by Fox and unlike their previous film they did not cast an Asian actor. Instead in 1931 Fox introduced Swedish born actor Warner Oland in the role of Charlie Chan. The film was an immediate success and Fox followed this success by purchasing the rights to The Black Camel. Oland claimed he had Mongolian heritage and perhaps this was the reason he needed very little make-up to achieve the Chan look. He also had experience playing Asian roles in his previous movie appearances, but these roles were the usual stereotypical evil Chinese villains.

Oland played Chan as a more gentle and self-effacing character downplaying the superior attitude of the Chinese detective in the books. Oland often starred with Keye Luke who played Charlie’s “number one son” Lee Chan.  Oland’s humor in the role of parent helped make the character and the films quite popular.

The Loss of Oland

Oland was working on the film Charlie Chan at the Ringside.  He is said to have told the crew he needed a drink of water and walked away never to appear on the film set again. He returned to his native Sweden for a rest and died there in 1938 after having appeared in 16 Charlie Chan films.  His last film was changed to Mr. Moto’s Gamble starring Peter Lorre. The film footage already shot with Keye Luke playing Lee Chan was kept and new footage was added with Peter Lorre.

Fox thought about doing a “Son of Chan” series featuring Keye Luke in the title role but then decided to look for another Chan. Key Luke’s contract was not renewed for the new Chan films, although he later reprised his role in the last two films with Roland Winters.  Sen Young replaced Luke and played number two son, Jimmy Chan. 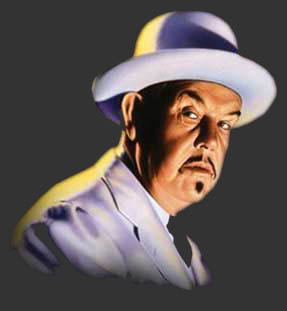 Because of Oland’s popularity the studio knew it would be difficult to replace him and they tested thirty-five different actors for the role. Eventually Fox settled on Sidney Toler and produced 11 more Chan films with him through 1942.

Toler was originally a stage actor and knew all about the theatre and even managed several production companies. He had written numerous plays for summer stock theatres and made a good living from the royalties.

Toler’s Chan wasn’t as mild-mannered as Oland’s portrayal and Toler brought back some of the flavor of the detective from the books. The first film featuring Toler was Charlie Chan in Honolulu.  To help the audience accept Toler the setting for this film was Chan’s home state of Hawaii and featured his wife and children.

Fox decided not to produce any additional Chan films and their last film Castle in the Desert didn’t mention Charlie Chan in the title. Toler asked to purchase the film rights and Fox agreed although they maintained part ownership. Toler convinced Monogram Pictures to release the films and he continued to make Charlie Chan films until his death 1947. Toler appeared in 22 films between Fox and Monogram Studios.

Toler’s death. He was actually several years younger than Keye Luke who returned as number two son. Winters made six Chan films starting with The Chinese Ring and ending with Sky Dragon in 1949.

There were several screen writers for the Chan films but the two most famous were Robert Ellis and Helen Logan who began crafting scripts with Charlie Chan in Egypt. They were prolific writers and while writing the Charlie Chan series wrote for Shirley Temple, Jane Withers, Cisco Kid and also penned many Betty Grable musicals to name a few of their movie credits. They established the formula that each of the subsequent Chan movies followed.

There are also four lost Chan films from this era of movies. Whether they deteriorated because of the quality of the film or poor storage we don’t know. There was also a lax studio policy at the time that allowed staff to borrow films for personal use. It is believed that some people didn’t return the films unaware they had the only available copy. Whatever the reason these films were lost: Charlie Chan Carries On (the first appearance by Warner Oland) Chan Chan’s Chance, Charlie Chan Greatest Case and Charlie Chan’s Courage.

The Chan films were one of Fox’s most successful series attracting major audiences and box office dollars on par with the “A” films of the day. The Chan films also helped to keep Fox afloat during the Great Depression.

While there were many adaptations of the Chan stories the films from this period are perhaps the best known. The good news is Fox has restored the films and they are available on DVD for today’s audiences to enjoy.